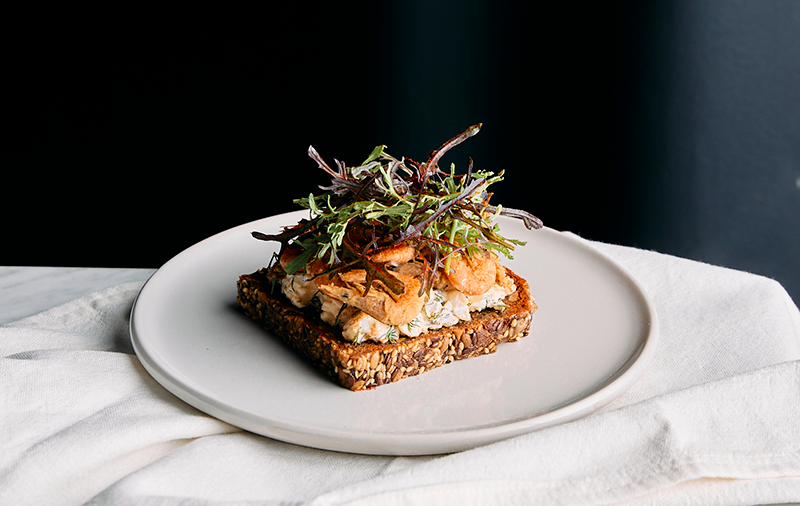 Bread and butter, but better: a new take on a Danish staple at Freyja.

“An open sandwich worthy of a knife and fork.”

That’s Freyja Executive Chef Jae Bang’s description of smørrebrød. And, whilst his portrait is somewhat essentiallising of the traditional Danish dish, it hits the nail on the head.

A simple dish, rich history and the ability to be elevated with high-quality produce are the key ingredients, if you will, to creating something that gets tongues wagging.

Smørrebrød has humble beginnings. Literally translating to “bread and butter”, the dish was often eaten by peasants who didn’t have two pennies to rub together, much less two pieces of bread.

Quintessentially Scandinavian and a key ingredient to the dish, rye bread has been a staple of the region since the Iron Age, being the most commonly used grain for bread, up until the beginning of the 20th century when different grains became more accessible.

The beauty of smørrebrød is that it’s whatever you make it. Toppings could be as simple as butter, with elements of the previous evening’s meal. Its versatility and simplicity saw it become a Nordic staple; a symbol of the region and its culture and an essential inclusion at any good lunch meal.

“The dish itself has gone through many evolutions, but what it represents is unchanged,” says Bang. “It’s a huge part of the way the Danish socialise during lunchtime, with smørrebrød at the centre of it.

“It’s embedded as part of the culture and represents gathering, being part of a community whilst sharing and socialising. Smørrebrød brings people to a table together.”

Evolving the dish for the Australian market, Bang and his team have put their contemporary take on the classic dish, whilst staying true to the principles of Nordic cuisine.

“Nordic cuisine is all about creating networks and community, not just with chefs, but with local producers, small farmers and fishermen. It’s not distinct like Italian or French. There are no prescriptions or specific techniques. It’s more about the philosophy you bring. I’m always asking myself; how can we work sustainably? How can we work as locally as possible?

“Sourcing our ingredients this way gives a better depth of flavour to the finished product.”

Eat smørrebrød once and you’ll notice that the meal is highly palatable to the Australian market, however, you’d be hard-pressed to find a venue serving it. It simply hasn’t been done yet in Australia. Unlike bagels, paninis and the myriad of glutinous-based crazes before it, Freyja is the first to stake claim to the smørrebrød, breaking the ice for this type of cuisine in a market not yet saturated with Scandinavian influence.

Freyja’s lunchtime smørrebrød offering is the perfect way for Melbournians to dip their toes into ‘New Nordic’ cuisine. With capital cities that teem with diverse food options, the opportunity for a new culinary experience is something very novel to us spoiled Australians, and Freyja has piqued the curiosity of foodies near and far.

Book your table for lunch here